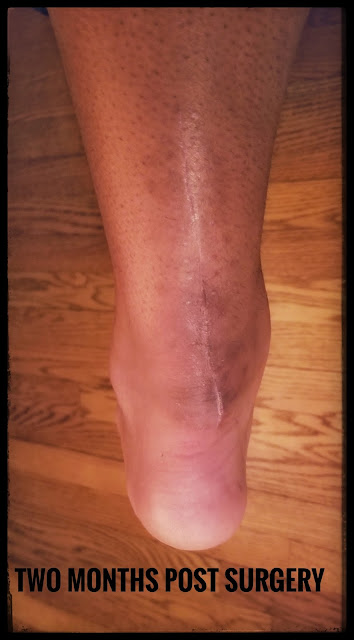 Since I skipped the last two weeks of the CAM boot and went to the weight bearing boot, my heel was getting incredibly sore.  I purchased some soft gel heel cups and put them in my shoe or boot and this helped.  My feeling after being in the weight bearing boot for a full day of work, is that my heel would actually be better off in just a plain tennis shoe.  Instead of being in a boot for another month I just made the call that I was better off without a boot and went for the tennis shoe and a heel cup.  (It is now very evident we walk around in a type of high heeled shoe, as this was less aggressive then my weight bearing boot)

It felt great to be free from the boot.  Since I no longer used the boot, I decided it was time to take the dreaded measurement to see how much calf atrophy had taken place.  Pre achillies, my left calf was 40.5 cm, right calf was 42.5 cm.  Post boot, my left calf was 38.5 cm and my right had grown to 43 cm.  There is definitely some work ahead in the hypertrophy department.  (post in the future on the science of hypertrophy)

Weeks 3 and 4 I had been training in a high heeled Timberland boot doing everything that I could think of that didn't cause discomfort, but put a load into my legs/hamstrings/calf.  About week 5 I switched to an Olympic Weight Lifting shoe.  Things like heavy KB swings felt great in them.  Squats and all the variations of squatting you can think of.  Trap bar deadlifts with a more neutral shin angle.  The big breakthrough in week 6 is I specifically started doing heavily assisted calf raises. At first these seemed uncomfortable (not painful) with me relying on strongly assisting my bodyweight.  Straight leg raises with the gastrocnemius doing most of the work is much, much harder then the seated work, where the soleus does most of the work.  This goes along with the atrophy, my lateral gastroc is gone.  My medial soleus was much stronger and bigger in comparison.

Week 6 also brought the breakthrough that I can put on my bike shoe and pedal my bike on an indoor trainer.  While higher resistance at the time didn't feel great, it was doable.  It was nice to be back on the bike!  Week 6 and 7 I basically started to do as many seated and standing assisted calf raises as I could.  I rode the bike almost every day for 20-60 min.  The end of week 7 saw a 2x10 min interval at 200 watts.  (don't laugh bikers, this is good for me)  I deadlifted in a flat shoe 3x2 at 295 pounds.  My brain put the kibosh on 335, I just couldn't budge it.  The next day, I was nailing unassisted standing calf raises though.  Interesting that it happened after that.  Neurally speaking, I think my brain took some of the breaks off and my calf responded.

I'm still dealing with some swelling around the heel and the lateral heel in particular.  I am using floss bands and ankle pumping to try to address this issue.   By end of week 7, I was getting almost 5-10 degrees of dorsiflexion without ever stretching, just walking (limping), biking and strength work.  I assume this will improve with more motion.  I work the tissue of the lateral calf area into the lateral ankle with my MOBI every day for a bit and this really cleans up my gait.

My follow up appointment with my surgeon was exactly 8 week from the surgery.  Happily the stuff I had been doing is paying off.  It's hard to really know when it's your first achillies rehab and you only are going by what you can find.  He was blown away by the lack of atrophy, the ability to raise up on my toes, the thickness of the tendon (this was good)  the mechanics of the ankle and the strength of the muscle.  He stated it was the worse achillies he had done, but it was easily the best he had every seen someone respond.  He even called in another surgeon to see me do a calf raise.  She was shocked.  They both now will have a new set point on what they can tell their patients on what to do minus just wear a boot.  (that was the guidance I was given)

The journey so far has been about doing what we know to do and applying it.  Getting creative to figure out ways to exercise and also keep it from being monotonous.  Rehab can be discouraging if you do the exact same things every day.  Find new methods, but keep your principles.  I'm still a long way off from heading to the track for a sprint workout.  But, I'm closer then I was 7 weeks ago, and way ahead of where I would be if I was still scooting around in a boot.

I post a lot of the variations of rehab videos in a timeline on my Instagram drjasonross   You will have to wade through a few (ok lots) of pictures of coffee and an occasional picture of my kids.  But, I'll be posting more training videos in the future as well.
Posted by Jason Ross at 10:48 PM 5 comments: