The Secret Life of Fat is a book by Sylvia Tara.  Reading this book gave me a new understanding of this organ, yes organ, just like your liver.  It is much more then the blubber we think of when we pinch that inch.  It also gave me more empathy of the plight of someone that is "constantly" trying to lose weight.  Essentially, the body is rigged to prevent you from winning, and when you do think you won and let your guard down, it strikes again.  Fat is smart.  It can think.  Think about that for a bit.  I took copious amount of notes but I'll go through and highlight some important ones with recommendations on lifestyle to try to keep fat working for you instead of becoming a health risk.

There are three types of fat.  White fat, brown fat, and beige fat.  White fat is what we usually think of, the stuff we are always trying to get rid of.  Brown fat is fairly new discovery in the last 10 or so years.  Brown fat actually raises metabolism and burns white fat.  Beige fat can become white or brown.  This will be influence by our environment and stressors.  Think exercise.

Here is an example of the FAT LOOP that we see all to often.
1.  We eat to much
2.  Fat cells grow until they are overcrowded
3.  Send out signals to immune cells to send macrophages to engulf the fat cells.
4.  Inflammation/chronic
5.  Fat no longer responds well to insulin
6.  Pancreas has to produce more insulin
7.  The loop of constantly needing more insulin as cells become more insulin resistant.
8.  Cells are not getting the sugar and fats from our blood and are starved for nutrients.
9.  This makes us hungrier.
10.  We eat more.  The loop starts again.

There are different types of white fat.  Subcutaneous (close to the surface)  Think of jiggly fat.  Visceral fat.  Deep and close to the organs.  Ever pat a beer belly and it's hard, that is visceral fat and that is dangerous.  It emits more hormones and cytokines (inflammations) and is correlated with diabetes, heart disease and even dementia.

The hormones to know. Adiponectin, this sensitizes the bodies response to insulin.  Guides sugar/fat out of our bloodstream and into subcutaneous fat.  It removes toxic lipids called ceramides.  We can increase adiponectin with vigorous exercise.  Leptin is a hormone that makes us feel full, it inhibits hunger.  Ghrelin is it's opposite, Ghrelin will make you feel hungry.  Lack of sleep produces a bad combo of low Leptin and high Ghrelin.

How Your Set Up To Lose
You have lost fat, it's now harder to keep it off then someone that has never gained weight.  Losing weight makes you more responsive to food and less able to control intake.  It appears this doesn't go away.  The hormone levels appear to alter bodies that have lost weight to be hungrier then before they had lost weight.  Not only that, but the metabolism was lowered at the reduced fat.  You can see why it's called "yo-yo dieting."  What you ate to lose weight, will eventually become enough to make you gain that weight back.

The danger of this cycle is that often the subcutaneous fat that is lost comes back as visceral fat.  In liposuction, most ended up regaining the same percentage of fat, but in different areas with more visceral fat and with less healthy fat.  The one way this was stopped is when after liposuction the individual took up exercise.

Onto some of the craziness.  Virus can potentially be causing obesity.  The virus AD-36 has been shown to crossover from chicken to chicken.  Studies have confirmed this.  From an ethics stand point you can't really reproduce this in people.  One lead researcher in this believes 30% of all obese individuals have this virus in them.  (He states there is no cure at the moment, but what you eat and how you exercise is still up to you, you just may have to work harder)

Your gut biome is insanely important with fat gain.  Lean individuals have a more diverse gut bacteria.  In fact, as you lose fat you lose bacteria called Firmicutes and gain Bacteroidetes.   The gut bacteria influence the fat storage in a few ways.  The microbes have enzymes we don't carry and can thus digest parts of the plants that our own digestive system can't.  Ultimately, the bacteria change digestion in two ways, improving the ability of the gut to absorb food and increasing the amount of sugar extracted.

Genes influence our resting metabolism, fat percentage, abdominal visceral fat, triglycerides and cholesterol.  So it's not just lazy or lack of effort for weight gain.  This can take some stress away, but it doesn't mean losing fat can't be done and shouldn't be a goal.  Because, the trump card, is vigorous exercise.  It has shown to erase genetic variables.  If you are an individual that genes are against, it means you may not get a cheat day or cheat meal.  You will have to be more diligent.  We all know that guy that eats McDonalds and has a 6 pack without doing much.  The opposite is also true.  Accept it and move on.

Women tend to store more fat then men in every culture across the world.  They also tend to have what is called a better compensating pattern after exercise then men.  This means that men in general underestimate what was burned and eat less to return to caloric neutral.  Women tend to do this better so they estimate what to eat more close to what they burned.  They think this is a biological pattern to ensure health.

Fat cells have receptors for hormones.  As we age, we are producing less hormones that tell us to burn fat, so we tend to gain fat.  At the same time we produce more hormones such as cortisol. Cortisol is a hormone correlated with abdominal fat.  Can you see another cycle?

WHAT TO DO
The old saying in rehab is that the most likely injury is the one you already have had.  It's kind of a weak way of saying don't get hurt.  In fat loss, the best way is to not allow yourself to gain that extra 15 pounds, because there are metabolic consequences that come from this.  Now onto real advice.

1.  Shift the mindset from, I'll lose this 20 pounds and resume normal life, to I'm going to change my lifestyle and lose weight in the process.  The yo-yo weight gain will happen if you don't.  I've already told you this can lead to more dangerous fat levels.  In fact, I wouldn't start the process without this commitment.

2.  Improve sleep.  Get this capstone in place.  You are fighting an uphill battle as it is, why push the stone up the hill in the process.

3.  Weight loss has to come through nutrition.  Don't add exercise into the equation until you got the nutrition dialed in.  You should be able to lose weight without exercise.  Don't move to exercise until the nutrition is in place.

4.  Nutrition should be focused on the gut biome.  Changes there will have bigger implications.  Soluble fibre is big.  Get 6-8 fist sized vegetables every day.

Genetics plays a huge role.  In the end, you are still in control of the process.  The process may be harder or easier, but it's still our each individual choice
.

Create The Environment For Success

"Environment is the invisible hand that shapes behavior. Creative manipulation is an underrated tool in affecting rate of skill acquisition."
Coach Stu McMillan

One of the things I've kept in the back of my head was the comment that you may think you have always known something when you hear it, because it seems like common sense, but yet it's actually a new concept for yourself when you stop to think about it.

This was a light bulb moment when I saw the above quote by my friend, Stu McMillan, head sprint/power coach at Altis. Part of me has felt like I've always known it and have stumbled upon some success with using this method, but I believe it was with out fully realizing it.

Essentially, manipulate your environment to create an outcome that you desire. I'm looking at it more from a lifestyle design and therapy lens then sprinting or athletic technique, but principles stay the same. 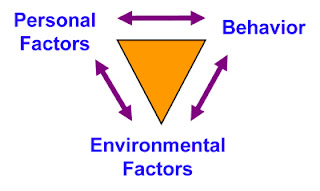 I was trying to incorporate more aerobic work this winter. I came into the spring far behind my goals last year. This winter I got a trainer to ride at night after I put my kids to bed. I used it. When I left it up with bike attached I used it more. It became even easier to just head to the basement and jump on. Very little set up now. I was shaping a new behavior. A time, a place and a reminder to shape the acquisition that I wanted, aerobic fitness.

Often times, runners and bikers become quad dominate and lose hip strength. This can lead to the development of knee or hip pain. One of the goals is to introduce the athlete to new exercises that they incorporate several times a day. My favorite type of exercise is one where failure is helpful, the brain is challenged, the outcome (hip strength) will happen if effort is applied and doing the movement keeps the strong (overpowering) muscles out of the equation without the athlete having to "think about it." Just try. The outcome will happen. The exercise is the environment for the new behavior. I often have them do some rolling exercise that proceeds the training. I do believe this has some value in tension modulation and some core muscle stimulation, but I also want that physical reminder. I see the roller or ball. I remember to do it.

For people that stand at a desk or work at a counter. Having a 6" stool/block to rest a foot on will change how much fatigue will be in their low back. A simple environmental instrument to change how you move.

There have been books written about the subject that cover in more depth this topic, but I always read/perceived that it was just taking away temptation. I realize now, removing the temptation is environmental manipulation. Removing food you don't want to eat from your home, eliminates the late night temptation. Placing a remote control in a closet or room usually means less TV watching.

Look around and pay attention. It can be a negative influence. Try to see how the environment is being programmed to manipulate or influence your actions, behaviors and thoughts. There are specialists that are hired by stores and retail to show certain colors, certain music, what's eye level, were the lights are, all to manipulate your actions/thoughts without you realizing it. Did you know the color red tends to get you to buy more, whether in person or online.

Take a survey of what you want to accomplish. Brainstorm some simple ideas and then create simple changes to the environment that you live to accomplish the behaviors that you want. Use the invisible hand of environmental manipulation to your benefit.