Interesting Article on the Flu Vaccine

I had a video ready for yesterday's motivation and it wouldn't load, so instead here is a link to an interesting take on the flu vaccine.  I myself am not a big supporter of the flu vaccine.  But, this like everything, should be made by the consumer.

They make some intelligent points about the value of a vaccine you have to get over and over.  How often do you get other shots?  Stuff to think about.  Either way, it's a good quick read, 5 min tops.

Email ThisBlogThis!Share to TwitterShare to FacebookShare to Pinterest
Labels: nutrition

One of the things I have been playing around with lately is showing patients the value of keeping the external rotators supple and loose. These are sometimes called the Deep 6, because of there number and the fact that they lay under the Glute max.

First, I test them with a single leg Glute bridge. Then after doing Active Release on whichever ones of the deep 6 are tight we retest. A majority of the time the Glute bridge is much stronger and smoother. Most report that they no longer feel that their hamstrings are going to cramp.

Try it for yourself. Single leg Glute bridge for three reps. Find your greater trochanter, take a lacrosse ball and roll just posterior to the trochanter for two minutes. Retest for three reps. If you got stronger you know the Deep 6 have been inhibiting your Glute extension.

-train out pain and train in performance!

Posted by Jason Ross at 7:31 AM No comments:

Thoughts on Brazil, Athletics and Life

I recently took a ten day trip to Brazil to work with a sprinter from Great Britain.  It was my first time to Brazil or anywhere in South America for that matter.  We were at 3 different track meets in the Brazil Grand Prix.  The cities were Belem, Uberlandia and Sao Paulo.

So again, my definition of poor has been brought to new a level.  We were on a bus to the first meet when the true reality hit me.  Going to chiropractic school in Iowa, I saw a few pig farms.   Small wooden lean-toos in a field.  Looking out that bus, on the way to the meet, I thought I was looking at a massive pig farm.  That is, until I started to see people.  Talk about an eye opener.

On the complete opposite spectrum, I visited the largest mall in Brazil in Uberlandia.  Nike shoes were as much as 300 dollars for a pair you can get in the states for 80 dollars.  People were buying them as well.

The meets themselves, were pretty amazing.  The crowds that showed up were large and enthusiastic.  I was at the USA National Track Championships in Indianapolis a few years ago and there was maybe a thousand people there. 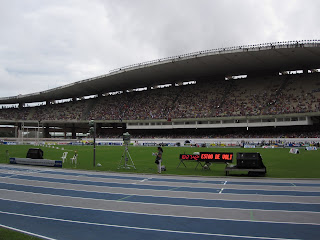 Sprinting creates different hamstring development.  The posterior chain development is insane in the fastest people in the world.  It's hard to explain, but you can visually see those that sprint and someone that lifts a lot of weights, the difference.  Sprinting is high intensity and when you have been doing it for years and years, high frequency.  It creates a different density, length and feel, then lets say deadlifts.

Athletics can be a great bridge to different cultures.  I became friends with a strength coach from Cuba.  He didn't speak much English and I speak no Spanish, but we managed to hang out and "talk" about isometric training (a topic I want to learn more about) and myofascial release.  A topic he had never seen in action before.  He said in Cuba, all they do for the athletes is stretching.

He had some tremendous athletes.  I watched as one of his triple jumpers hang cleaned 170k with such ease I had to count the kilo's myself.  I was kicking myself I hadn't brought my camera to film it. 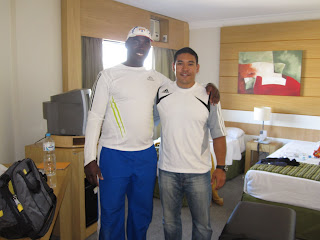 Top sprinters have great front side mechanics.  The knee lift is awesome.  It's amazing how technical the 100 meter race actually is.  I wish I had known this when I was in high school and college running.  The most direction I ever received was try to stay relaxed.

To sum up, it was a great trip.  Be thankful for what you have.  Start sprinting. It's a great fat burner and will develop the posterior chain like no other.  Try to learn from everyone you meet. 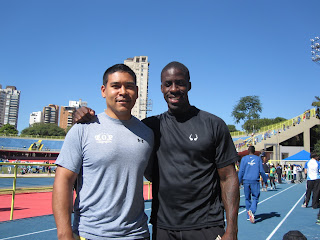 Email ThisBlogThis!Share to TwitterShare to FacebookShare to Pinterest
Labels: people


I don't think I will be able to post due to lack of time and stable Internet connection. I am down in Brazil working with a sprinter from Great Britain. I will give a summary and hope some pics when I am back next week!

-train out pain and train in performance!

Posted by Jason Ross at 2:57 PM No comments:

Sunlight is not just for Vitamin D

We have all heard of the benefits of vitamin D recently. The importance can't be underestimated. However, this is about the rest of the good stuff that a little sunshine is doing through your body.

The eyes have photosensitive cells in the retina that have influence on the pituitary gland. These cells also influence the hypothalamus gland that helps control our circadian rhythm, which in turn, influences sleep patterns. Sleep, good or bad, will influence our hormones.

Lastly, the pineal gland is influenced. This is where melatonin is produced. It happens in the dark while you sleep. (even a small amount of light on the skin can disrupt this process) This is where you get the nice tan! Most importantly this influences sleep, is an antioxidant and also helps with depression. I recently just found out that aspirin decreases melatonin. ( big time info)

Take away this, when you wake up in the morning get some sunshine on those eyeballs. It will help with a lot of important bodily functions, not just Vit D.

I got a lot of this information from Phil Maffetone.


-train out pain and train in performance!
Posted by Jason Ross at 10:54 PM No comments:

Email ThisBlogThis!Share to TwitterShare to FacebookShare to Pinterest
Labels: nutrition

First things first, we know that anterior head placement will alter the curve and increase the chance of arthritis. SPINE. 1986 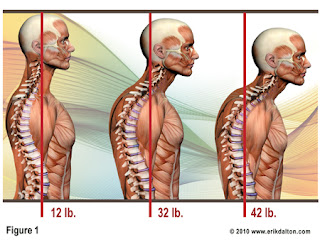 Second for every inch the ear comes forward of the shoulder we increase the weight of the head by about 10 pounds. Physiology of the Joints Vol.3. Reading through some Charles Poliquin articles, I came across a reference he uses by Rene Cailliet in Rejuvination Strategy. Cailliet is a biomechanics guy that has worked with the cervical and lumbar spines. He states that a displacement that creates enough weight to equal 30 lbs is enough to pull the whole spine out of alignment.

I seem to be able to give this a little second hand credence. When I stabilize the neck and help restore better mechanics of the upper cervical and cervical/thoracic junction, the low back stabilizes as well.

What to do with this info? Posture check right now. Where is your head? Remember, lose the battle with posture, you lose the war with health and performance.


- Posted using BlogPress from my iPad
Posted by Jason Ross at 8:36 AM 5 comments:

This will make you go move some weights!

Posted by Jason Ross at 9:11 AM No comments:

We use to have this challenge on the bobsled team of 100 push ups in 4 minutes. It blew everyone up. The first time I tried, I figured I could easily do it. Well 92 or 93 hit and I just was so locked up I couldn't get myself off the ground. Now, all the way down, all the way up. Give it a shot, if you don't reach it, try this little tip out to help build up some strength endurance in those triceps. 100 push ups in 4 minutes, is one of the fitness goals I always try to be able to do now. Get pushing!

The Interossei Muscles of the Foot (Why Barefoot Running is Booming) 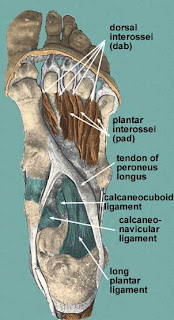 They lie between the metatarsals and have some interesting properties.  The first dorsal interoseus has attachments into the peroneal sheath and some have attachments into the long plantar ligament.  They have extensive fascial connections into a lot of soft tissue around them.

Why is this important?  In two words, Shock Absorption.  Warren Hammer describes it best.  During gait, at forefoot strike, the metatarsals spread out, this in turn loads up the mechanoreceptors in the interossei muscles.

The information relayed from the mechanoreceptors in the interossei muscles as they spread out cause a reflex contraction of the quadriceps. This contraction stabilizes the lower extremity muscles.  This is known as the positive supporting reaction.

This is one reason barefoot running has been such a boom lately.  Why you hear such revelations about all of a sudden after going barefoot, my lowerback pain is gone.  Hip pain is gone.  Calf pain...ect.


Ultimately, what you can take away from this can be summed up with one recommendation.  Don't wear tight shoes that don't allow your forefoot to expand.  Without room for the toes to spread, the initial impulse from the interossei muscles don't occur and ultimately shock absorption is inhibited.
Posted by Jason Ross at 7:42 AM 8 comments:

Posted by Jason Ross at 8:20 AM No comments: