Foods you eat can have a direct impact on your skins ability to fight UV rays.  Dark chocolate flavonoids show great ability as well as green tea and tomatoes.  Instead of just slathering on sunscreen perhaps add these foods into your diet.  Chocolate as Sunscreen.

For therapists working with athletes and groin pain, make sure the diaphragm is functioning properly.  Thomas Myers has shown a direct relationship with the Pectineus muscle and the diaphragm.  Find Your Pectineus.

A very interesting paper on a potential true cause of Fibromyalgia.  The hypothesis is there is extra sensory nerve endings around shunts in the hands and feet.  Not only are they involved in temperature regulation, but in diverting blood to where it is needed the most.  Fibromyalgia patients have extra sensory nerve endings which explains why they often have sore hands and feet.  Fybromyalgia is Not All in the Head.

Circadian Rhythm is a very important piece of the puzzle when it comes to health, sleeping and hormonal issues, but this article talks about osteoarthritis and how cartilage cells actually have clocks as well.  The cartilage has peaks of temperature.  This has implications for drug use, perhaps the drugs will have stronger affect when taken at certain times.  More and more the bodies natural circadian rhythm shows strong health implications.  Body Clock linked to Osteoarthritis.

MRI confirms that people that suffer with Restless Leg Syndrome have higher levels of Glutamate in the brain.  If confirmed will lead to different drugs already available to be used as first treatment options.  RLS and Glutamate.

Probably the coolest thing I learned is why we have an appendix.  The idea that we just have an organ that "we don't really need," has never really seemed right to me.  I had heard that it was perhaps part of the immune system.  This article talks about how it houses good bacteria and that it repopulates the intestines after heavy bouts of antibiotics or severe diarrhea.  Appendix isn't Useless.
Posted by Jason Ross at 8:28 AM No comments:

Monday Motivation: FAIL UNTIL YOU SUCCEED!

Posted by Jason Ross at 7:20 AM No comments: 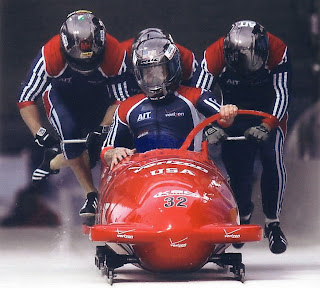 Bobsled is in the news and surprisingly it's not Olympic year.  A recent addition to the sport, Lolo Jones of Track and Field hurdler fame,  became a bobsled athlete this past year and with this VIDEO, raised a few eye brows.  I've never talked to Lolo, but I still have a few ties into the sport and have heard that she was a hard worker and was a pretty decent push athlete.  Not quite at the level of some of the top US pushers but good enough to make the World Cup team and compete.

"There is no such thing as bad publicity."

I think it's actually a good thing.  Many people make the mistake thinking these guys that win medals make a lot of money from the sport through actually competing, endorsements and medals won.  9 out of 10 of bobsled athletes for the US won't make enough to live on without going into debt.

Housing and food are provided for sure, but not much else.  Some of the top teams will receive a 2000 dollar stipend per month.  But, that is 25% of the athletes.   Flight home to see family, not covered.  Leaving the training complex for a meal not covered.

When the season ends, you are technically no longer a "member" of the US team.  Come summer, you have to pay your own way back to camp to "remake" the team.  Often this requires a hotel stay and food. Over two weeks this can easily reach 1500 dollars.  You are the best pusher in the world, guess what,  you still have to remake the team on your own dime.

As a whole, their is no monetary gain in bobsled.  There is no fame in bobsled.  You are not going to see a bobsled athlete have any type of endorsement.  Why?  It's not because they are not marketable freaky talented, smart athletes, it's because you have to be able to offer value to the company.  In the US their is no value in the sport.  It's not going to excite kids to buy shoes, or companies to buy commercial time if bobsled is even shown on TV.  You will most likely leave the sport with debt.

So whats the draw to do this?  Most every athlete at some point in their life has thought about how cool the Olympics are.  Bobsled allows that dream to be pursued.  It allows most of these athletes to continue athletic careers that would be over without it.  Very few in the US grow up thinking, I want to be a bobsled athlete.  Most come from Track or Football careers that are over.  It allows you to compete for the Untied States against some of the best athletes in the world all over the world.  That is cool.

In the end, it is a choice.  Pursue sport or go make some money.  I'm glad Lolo did what she did.  Any light that is shed on this sport is a good thing.  Maybe with a little more limelight some of these amazing athletes will be seen as marketable and be able to make a living pushing that sled down the hill in USA colors.
Posted by Jason Ross at 10:53 PM No comments:

What is a Warrior? from Warrior Poet on Vimeo.
Posted by Jason Ross at 8:30 AM No comments:

Leave the Dumbbells at Home

Every now and then I'll start to think about an exercise a little more intensely.  It is often after hearing a patient hurt themselves doing it.  Most of the time, it's just a quick technique analysis, minor adjustment and the exercise becomes a "good" thing again. 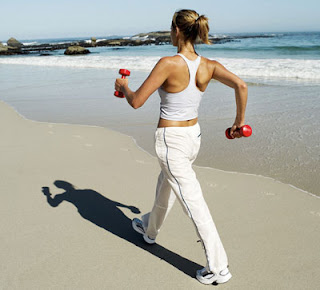 But, once in awhile, I think there are a few exercises to just put on the shelf and retire.  Enter the Dumbbell Curl Walk.  It seems to attract women over the age of 40.  In their hands are colorful dumbbells.  They go for walks as they do dumbbell curls and an occasional shoulder press.  While I admire the though process, lets make it harder and combine weightlifting and cardio, it's not a good idea.

Walking is a reflexive activity.  You don't think about it and no one ever taught you how to do it.  In fact,  if you slow it down and start to think about how to do it, you will most likely mess up.

Now curling a weight is not a reflexive activity.  You have to think about it.  You have to have some technique.  Don't focus and you do enough repetitions and a painful shoulder may result.

Walking is a tremendous exercise.  Everyone should do more.  Often my advice after getting adjusted is go for a brisk walk and use that spinal engine.  Curling is also a good exercise.  It's the combo that doesn't make sense.

If you want to make the walk harder, invest in a weight vest.  That's a very safe, very awesome exercise.  Like running with ankle weights, put the dumbbell curl walk in the retirement home.
Posted by Jason Ross at 8:17 AM 5 comments:

Monday Motivation: Wake Up Every Morning

Posted by Jason Ross at 8:49 AM No comments:

A Random Rant on Exercises

Are squats good or bad,  let me see you squat.  Yes, squats how you just did them will indeed cause your knees to hurt.  Yoga gets trickier, there are so many forms of yoga that one form can be completely different than another.  Some things to consider, are there more people in the room than digits on your hand?  Unless your very good at yoga, you need someone watching you correcting your form.  Slight pressure here vs here, goes a long way.  So unless your great, get to a smaller class.  Get a teacher that makes corrections, just isn't "practicing" while you pay them.

Pilates is a different beast all together as I think that hands on is much more important.  Constant correction to get the right muscle cues are very important.  For some reason I see a lot of messed up diaphragms on people that do Pilate's a lot.  I think they are substituting psoas/iliacus for the lower abdominal/obliques.

What gets even trickier, when an exercise can be both good and bad.  I often watch patients lunge for an evaluation.  It often times isn't pretty.  So at this point a lunge for strength correction would be a horrible idea.  You would strengthen the dysfunction.  Clearing out what you find and watch the lunge pattern become smoother and more powerful, now the lunge becomes an excellent exercise.

So this leads to the notion "I had hip pain, did a bunch of lunges, my hip got better."  This information is passed on to family/friends.  Family/friends don't improve by doing a bunch of lunges.  Your back hurts, "do these yoga stretches and your back will feel great."  Really?

The point of this rant was,  yes, things can be both good and bad.  Frustrating, maybe.  When in life do you want to just be a cog in a machine.  Why do you want movement to be?  You are unique, whats good for Peter, might not be good for Paul.  Find the things for you that will make improvements in your health and fitness.

Posted by Jason Ross at 9:22 AM No comments: