Biking in Iceland with Friends

"You didn't come to Iceland to ride your bike in nice weather!"

That would become prophetic.

We flew into Keflavik on a beautiful sunny day.  At 66 degrees latitude, the days were long and the sun was bright.  I was struck by the lack of trees.  A local told us the Vikings cut them down to make their ships and they have never recovered.  I have no idea if this is true.

After driving into Reykjavik we started walking around.  It is the capitol and biggest city in Iceland.  I was again struck by the quite.  You could have a normal conversation.  There were cars, but not that many.  The amount of people seemed to be about 75% less then what I was expecting in a big city.  In a country of around 300,000 I guess this makes sense when you spread them out over the size of piece of real estate the size of Ohio.  Sorry Iceland to make any comparison to one of our worse states.  (haha)

In America, you go into any store and you are blasted with music.  It seems to drown out your thoughts.  The person I was traveling with develops products as a job and stated that Europeans value quite and are always asking his company if they can make it more quite.  I get it now.  It become something I really enjoyed.  In comparison, on our way home we flew into Minneapolis airport and it was sensory overload.  Music, noise, beeps and flurry of background noise.

I don't believe I heard one siren, or one honk in a week.

Reykjavik is a super easy city to walk around.  No car needed.  Lot of small hills to navigate, but regardless, if you can walk 5-8 miles over the course of a day, you can see it all.  Found an amazing coffee spot called Reykjavik Roasters and over a day and half may have had a few (perhaps 12) cappuccinos.  I was told to try the local fair so we did.  We found a local spot that served them in tapas style.  Puffin, Lamb, Whale, Arctic Char.

The texture was not what I was expecting.  I'm not sure if it was only the place we were at, so reader beware.  N=1.  Not my favorite, any of them.  I was very happy, they came in small doses.

If you look up any top things to do in Iceland, you will eventually see, try an N1 hotdog.  N1 is a gas station.  So we did, and they were quite good.  I looked up what made them different and they are made of lamb.  Fried onions on the bottom of the bun, gave them a nice crunch.

That night we had a beer at Reykjavik Brewery where they were having a meet and greet for the riders of the bike race.  We ended up staying late there talking to the owner and his best friend from high school, who now is a Cardiac Imaging Specialist living in Iowa, who was back visiting.  (High school in Iceland is ages 16-20)  Being able to talk to locals about their country and ours, the interesting viewpoints of what you know and what they know and think is one of the greatest gifts travel can give.

"You are to big up top to make it up our climbs."

This was the first thing he told me when we told him we were doing the race.  Perhaps this was prophetic number 2. 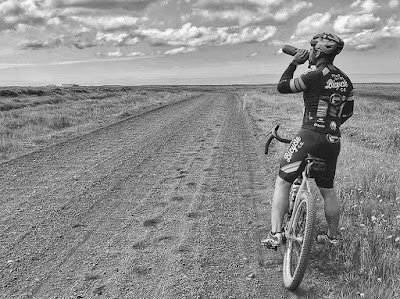 Driving into our next stop where we would be staying for the race was quite a dramatic difference in landscape.  You started to see a few more trees and much larger mountains.  The greens became something of a mind boggling cascade of hues and highlights.  How do you describe the color green when you have never seen shades or highlights in that tone.  My best effort is some colors were so vibrant that it looked like a cheap B movies radioactive green slime was escaping the mountain side.

Most people find race reports pretty boring.  So I'll sum up as it was the hardest I've ever had to work on a bike.  Climbing into headwinds for hours is not my strength.  Nor is crossing rivers.  But, I saw things and had my eyes delight in things you would not get to see if you hadn't toiled for hours getting there.  I understand the development of the Lauf gravel suspension fork after riding washboards for 20 some miles.  An example of your environment dictating function and creativity.  The Rift valley is the crest where the North American and Eurasian tectonic plates bump up.  It creates some of the most spectacular landscape in the world.  We got to ride our bike in it! 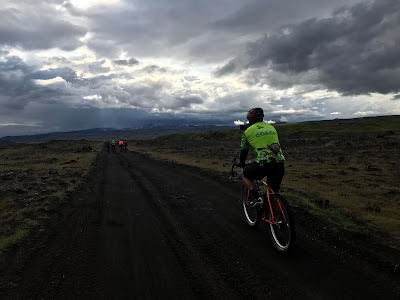 The next few days were spent exploring the countryside.  With it being July, the sun really didn't feel like it "set" till after midnight Eastern time.  If you like hiking, Iceland offers a plethora of trails.  Most are interlinked somehow.  Choose your own adventure.  Short, medium, long, hours to weeks could be had.  It was quite easy to get up on the ridge line of several trails and just scan out and take in miles and miles of views.  There is something magical about looking out over a horizon and not having it stopped.  No constraints. 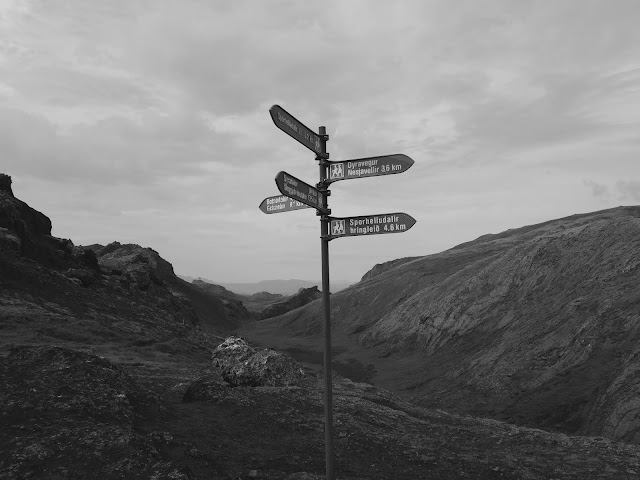 One highlight was hiking an hour up a mountainside and spending a few hours lounging in a hot spring river.  Heated by the Geo thermal energy coming from the earth.  The higher you went up, the hotter it got.  Natures own hot tub.  It was easy to envision ancient Vikings hanging out here.

One question that keeps getting asked and was repeatedly told to me before leaving was the cost of food.  It is more expensive.  They import almost everything.  From a personal viewpoint, some things are really bad and some were not.  I am used to paying 4 or 5 bucks for a coffee drink.  7-8 dollars for a craft beer.  This was no different there.  If you are trying to go to a sit down restaurant for dinner it will be pricey.  I'd estimate about 30-40% more.   You also do not tip in Iceland.   If you tip 20%, take this into account as it will drop your bill to only about 10-20% more.  Now if you are more of a eat on the go, you can find plenty of options on the cheaper side.

The craft beer culture has hit Iceland and it is (becoming) a known tourist attraction.  (Kind of like Grand Rapids where I live)  Siggy the owner of Reykjavik Brewery was telling it has more breweries per citizen then the United States.  They are coming of a beer prohibition that lasted until 1989.  Some interesting laws.  Gas stations and grocery stores can only sell a beer that is 2.25% ABV.  Breweries can not sell beer to go.  Verdun, their liquor stores,  are the only stores that can sell alcohol.  These are government operated and are not open on Sunday.  There is a profit margin per ABV that a brewery cannot go above.  So you won't find many super high ABV and for that matter quality craft beers will cost about the same as a cheaper beer.  One reason the craft beer culture is booming.

Driving along the country you are struck by the number of sheep roaming around and the coolest horses I've ever seen.  The horses are very unique (Don't by the way refer to it as a pony).  Smaller in stature they can have up to 5 gaits.  Most horses will have 3-4.  One unique trot is referred to as a To'lt.  It is a high stepping gait that is super smooth.  So smooth you can hold a beer and not spill it.  So I was told.  Their main is like a mohawk.  They are glamorous to see run.

In 2008 and I believe the following year, Iceland was in the news for almost a year and a half.  First with a banking crisis where they jailed their bankers for the mismanagement of the nations funds and followed up with a volcano eruption.  All the news and videos opened the eyes of the world to the beauty of this tiny island.  They went from getting 3-400 thousand tourists a year, to 3-4 million almost overnight.  It is just now that the infrastructure is starting to be in place to handle this amount of influx.  On plenty of the tourist attractions you could see old paths that lead much closer to a waterfall or tourist attraction that is now chained off.  Steps and walking paths are making it more easily accessible for the general masses.  Depending on your view points and who you are, this is good or bad.  Should nature be accessible to everyone or should you have to "work" to get there?  Should it be safe or should it carry common sense risk? 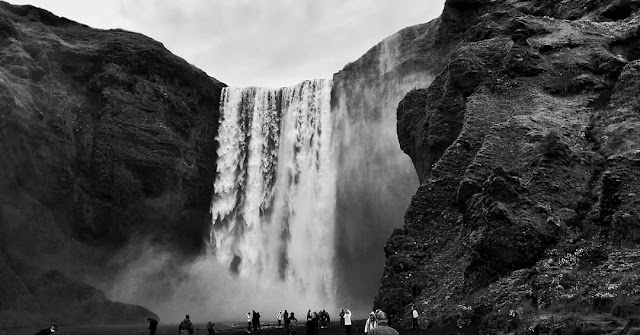 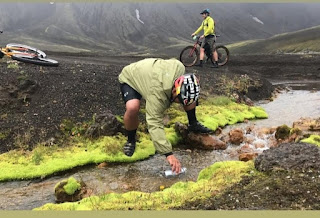 We drank out of the rivers on the bike ride.  Uncontaminated by man.  It felt weird and somewhat sad that something so natural now comes with the thoughts that I hope I don't get sick.  We had everything from 60 and sunny to 50 and rainy.  Some days, you would put on the rain jacket just in time for the sun to come out.  So be ready for all conditions.

Getting to spend time with friends exploring a new country by bike and hike was quite fun.  Having an event like the bike ride created an excuse to challenge myself from an endurance standpoint, but also gave a framework for the trip that allowed us to meet interesting people and get us to an area that you wouldn't normally explore.   It was a great way to see a country and get immersed into it quickly.  I highly recommend it.

A postcard I found on the way home.  It summed it up nicely.